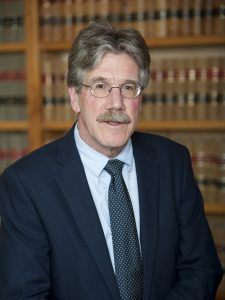 David Rath was born in Washington, D.C. in 1950 and grew up in Cooperstown, New York, moving to Vermont in 1974. David was graduated from Dartmouth College in 1972 and from the Franklin Pierce Law Center, now University of New Hampshire School of Law in 1979. David originally joined Roger Kohn in Hinesburg as an associate, and in 1981 they became partners in the predecessor firm to Kohn Rath Danon Lynch & Scharf. David focuses his practice in the areas of forest and agricultural lands and wetlands conservation, commercial real estate and representation of bicyclists injured in collisions with motor vehicles. David is admitted to practice in the Vermont Supreme Court, the United States Supreme Court, the United States Court of Appeals for the Second Circuit, and the United States District Court for the District of Vermont.

David Rath was an adjunct professor of Business Law at St. Michael’s College for many years, and has presented a variety of seminars and training sessions in the areas of his practice. He is a member of the Vermont Bar Association, having served on the Board of Managers of that organization for several years. He has been active in community affairs, serving on the Monkton Planning Commission and Zoning Board of Adjustment, and was previously the chair of the Champlain Valley Union High School Board.

David is an elite masters bicycle racer and has twice won the Masters National Cyclocross Championships.

David works part-time. David’s wife works at the International School of Stavanger in Norway. David works remotely from Norway for seven months a year and from the firm’s law offices in Hinesburg for five months.

About Us
Kohn Rath Danon Lynch & Scharf, LLP is a  Vermont law firm located in the Town of Hinesburg, providing a comprehensive array of legal services to our clients.  Our attorneys have extensive experience, and provide prompt, personal attention to all our clients.
Location
Office Hours