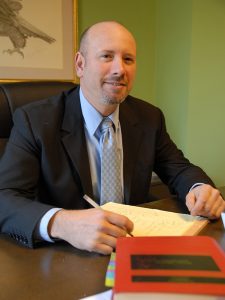 Robert W. Scharf earned his J.D. from Vermont Law School in 2010.  At law school he competed in Moot Court and worked as a researcher in Vermont Law School’s Land Use Institute.  Originally from Connecticut, Robert’s undergraduate studies took place in Connecticut and France, and he received a Master’s degree for graduate studies in England.  He worked in France, England and other countries on foreign aid policy and development projects before returning to the United States and Vermont.  Robert recently ran his own practice where he also co-founded the Vermont Employers Law Center, Inc.  He has been associate/of counsel at Chittenden County and Northeast Kingdom law firms, and was a summer clerk for the US Bankruptcy Court in Rutland.  Prior to his legal career, Robert had a successful decade-long career in government, international organizations, non-profits and academic institutions.  He has also set up and operated several small businesses here in Vermont, including a restaurant and farm-related businesses.

Robert focuses his practice on business and employment law, commercial and residential leasing, homeowners associations, civil litigation, bank counsel, modification and restructuring of secured debt, real estate including Act 250 proceedings, and conservation/farm law.  Robert is admitted to practice before the Vermont Supreme Court and the U.S. District Court for the District of Vermont, and is a member of the Vermont Bar Association.

Robert serves on the Shelburne Natural Resources and Conservation Committee and Shelburne Craft School Board of Directors, and is a member of the local business association, and the Society for Human Resource Management (SHRM). He is an avid fisherman and outdoorsman and a Certified Rugby Referee.

About Us
Kohn Rath Danon Lynch & Scharf, LLP is a  Vermont law firm located in the Town of Hinesburg, providing a comprehensive array of legal services to our clients.  Our attorneys have extensive experience, and provide prompt, personal attention to all our clients.
Location
Office Hours